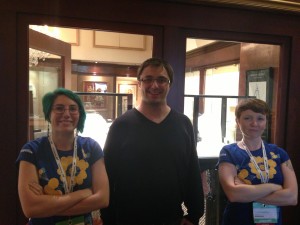 Last week I attended PuppetConf 2013 in San Francisco.  Having previously attended ChefConf 2013, my expectations were high.

As I wrote in my previous blog post, “Using Serena Release Automation and Infrastructure as Code to Build Your DevOps Solution,” Puppet can play an important part when used in conjunction with Serena solutions.

Plenty of enterprise customers were in attendance and there was a great session on Puppet Enterprise at Scale by Benjamin Irizarry of Bank of America, which is a good example of how infrastructure as code initiatives are no longer confined to start-ups.

The one thing that stood out at PuppetConf is that process orchestration is still a big problem, as illustrated in Eric’s demo.  Using Jenkins plus plugins makes for a simple demo for Continuous Delivery but it doesn’t change the fact that CI tools are build-centric and there is much more to a release than the output of a build.  Eric did not suggest that using Jenkins to drive a continuous delivery pipeline was good for production, just that it made for an easy demo.