This week on “Doug Serena, CIO”: The Final Chapter 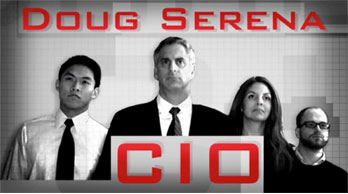 Episode five, the finale to the popular docudrama Doug Serena, CIO, airs on Monday, April 9th, concluding the case study of an intrepid IT leadership team’s quest to transform their company from endangered to dominating.

Last week, in episode four, the tension between “Team Doug” and “Team Brad” grew to a boiling point as the release date for Millennium quickly approached. We were also introduced to Doug’s “kids”, and the important trip to India he and his wife hoped to take to finally meet them. Not only the future of Doug’s company, Qlarius, but also the chance of meeting his sponsored children hinges on Millennium’s success!

In the final episode, Doug and his team celebrate a successful early release of Millennium. With a simple keyboard click, Doug releases Millennium into production, turning his team into instant Qlarius rock stars and heroes. While Brad is relieved about the application’s success, something new grips him, stress, as it is now the sales team’s turn in the company spotlight to capitalize on the new application by closing some new business in a hurry. In the end, the development and release of Millennium using Serena’s Orchestrated IT System helped Qlarius turn a corner, and also helped some orphan children in India to meet their sponsors from the other side of the world.

Enjoy the show and don’t forget to participate in our daily trivia contest, which runs through April 20th, for a chance to win prizes.