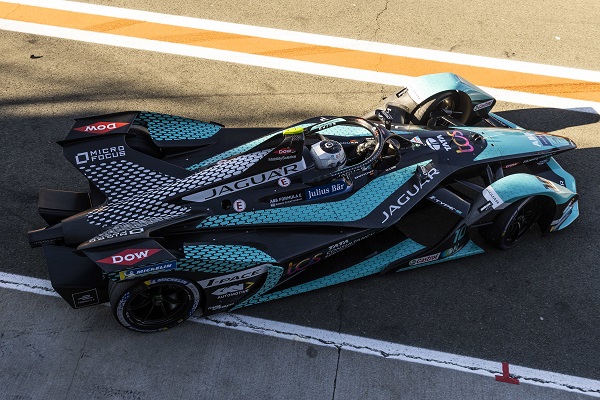 When Micro Focus became a technical partner to Jaguar TCS Racing in 2021, Majken Pullin, Manager, Campaign Integration and Activation, became a new fan of Formula E racing—and she says you can be one, too. Come behind-the-scenes of our technical partnership with Majken and become a fan in season 8.

It’s been almost a year since Micro Focus began its technical partnership with Jaguar TCS Racing, and for me it’s been a crash course in a new type of partnership and a new sport. I grew up watching Major League Baseball (MLB) with my dad. They use tons of data—just like Formula E—to win. But comparatively speaking, MLB is a relatively slow-moving sport with intermittent bursts of energy across three to four hours. While in contrast, Formula E is a fast-moving, dynamic sport that is all energy from start to finish in under an hour. Learning about Formula E and what Micro Focus contributes to Jaguar TCS Racing as the technical partner has kept me on the edge of my seat!

Last year at the beginning of season 7, I felt a “duty” for my job to watch the doubleheader in Diriyah so I would be knowledgeable of the race outcome and understand details. What I didn’t realize at the time is that watching the first race would be the only hook I needed. When the team describes Formula E as “playing chess at 280 kilometers per hour,” they really mean it! The race day starts early for the teams with practice and qualifying (season 8 has a new qualifying format you can read about here). And then it’s time for the race. So many things contribute to a driver’s overall strategy–overtaking, the circuit, night races, reverse circuits, and more. Check out this epic video from Monaco–even as a new fan, I knew what I was seeing from Mitch Evans was special! There’s also a couple of distinctive tactics in Formula E that add to strategy–let’s take a look.

FANBOOST is a unique Formula E element that allows fans to potentially affect the outcome of a race. Beginning the three days prior to and including the first 15 minutes of a race, fans can vote for their favorite driver. The top five drivers in the FANBOOST vote are awarded an extra boost of power that can be used during a five-second window in the second half of the race. Formula E is the only sport that provides this fan input–how cool is that? You’ll see us help the Jaguar TCS Racing drivers, Mitch Evans and Sam Bird, get votes for FANBOOST for each race by reaching out to the Micro Focus community.

Another interesting Formula E element is ATTACK MODE. Drivers activate this feature by driving through a special zone that is off the normal racing line. It gives them extra power for a specific amount of time. The FIA governing body for auto racing determines the number of times drivers must use ATTACK MODE during each race as well as the duration of each power boost. Teams are only notified of these requirements 60 minutes prior to the race, so this can potentially change strategy at the last minute. In addition, drivers must make sure they enter and exit the zone correctly to activate ATTACK MODE. Failing to do so adds seconds to their race and could cost drivers and teams points—or worse—a podium or win!

The racing team is a complicated, hybrid organization—and they travel extensively each season. To run, they need to securely access critical data from the cloud while using shared Wi-Fi at races, and from airports and hotels. This makes for a typical—but large—security attack surface. To help combat this, the team uses NetIQ Identity and Access Management to secure users, devices, things, and services. In addition, Jaguar TCS Racing is essentially a software company when it comes to making software updates to the race cars, so they’re using Fortify to secure those applications.

In Formula E, the team’s competitive weapon is data (in classic Formula 1, aerodynamics is king). Micro Focus helps Jaguar TCS Racing transform by deploying Vertica and IDOL to improve the way that they are ingesting, analyzing, and making decisions about their data. It’s exciting to have a front-row seat to watch an organization that is taking advantage of these Micro Focus products. We help them analyze structured data (like race car telemetry) as well as unstructured data (like publicly accessible broadcast television data and radio data between the drivers and the pit lane teams as well as for competitor drivers and teams). And the Micro Focus Professional Services team collaborated with Jaguar TCS Racing to create a custom app to integrate with IDOL. I’d secretly love to see this first-hand!

You can learn more details about all four of these fun use cases in conversations with Jaguar TCS Racing personnel, by viewing or listening to our 39-minute on-demand webinar.

Gaining at least one new fan for Formula E

Both MLB and Formula E have teams that use vast quantities of data and analytics to try to improve winning. But they certainly have different levels of energy. Baseball will probably always be my favorite sport. But…Formula E has definitely gained one new, surprised fan! If you haven’t seen a race, I encourage you to find out how to watch the first double header in Diriyah, Saudi Arabia January 28th and 29th. You won’t want to miss the energy!