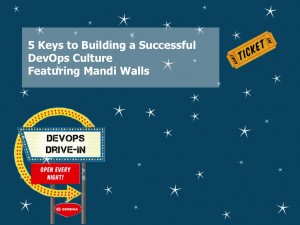 Glenn O’Donnell, Principal Analyst at Forrester paid a visit to Serena Software headquarters in San Mateo, CA this week and joined us for our monthly DevOps Drive-In webcast.  IT is in its own industrial revolution according to Glenn, in part because IT is currently too slow, has poor quality and customers don’t trust IT.  This revolution requires an IT fitness program and not a weight loss program where IT becomes stronger, faster and more resilient.  To improve quickly, IT needs to embrace Lean principles and methodologies.

Glenn provided an overview of how IT can leverage Lean value stream management and the DevOps principles of automation and culture to eliminate waste, increase quality and reduce cycle times.  He also outlined the “Seven Habits of Highly Effective DevOps.” These habits are:

During the webinar, we polled attendees and asked them to select which of the seven habits they thought would be the highest priority to improve their organization. Below is a graph of the results.

The majority believes automation and establishing common values and awareness between Dev and Ops would provide the most improvement to their organization.  I was surprised having developers on the front line of service support and implementing feedback loops scored so low.  Changing the culture is harder to do but I do like the DevOps principle of shared accountability and the “If I’m awake, you are awake” mentality.  If an operations person gets woken up early in the morning, the responsible developer should work alongside them until the problem is resolved.  You would get faster MTTR and improve reliability and quality.

It was a great DevOps Drive-in.  Thanks goes to Glenn and Forrester.  Make sure you catch our next DevOps Drive-in webcast on April 23rd.  We are teaming up with Cloudbees to discuss the challenges of Enterprise Continuous Delivery.