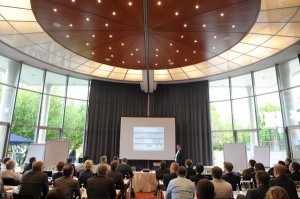 The recent Best Management Practice Congress 2013 (Bad Neuenahr, Germany)  was a James Bond-inspired conference with the theme, “The (IT) World Is Not Enough.“  This is so fitting in today’s world of increasing demands on the business to produce more and release faster.  And it leads to the question: Can IT keep up with such rapid growth?

Serena customer Portigon AG presented at the Congress on this topic and how Serena Business Manager (SBM) helped them with setting up a structured approach to optimizing their software lifecycles. Asif Mohammed Kahn and Joerg Hemmler of Portigon AG described their situation: a large number of developers, distributed teams, a continuously growing amount of releases, and a desired availability of 24/7.  At this point, I noticed quite a few agreeing nods from the audience. They understood these challenges as well as others that were mentioned and are just as important: compliance, visibility, auditability, reporting, and availability.

Portigon was able to solve their problems in a very unique, but replicable way. First, they showed all requirements of a release in the form of an SBM report that is available as a Microsoft Excel list. Next, using SBM, all changed source code files of a release are summarized in Microsoft Excel. By means of extensive connectivity abilities – for example via Perforce interfaces for version management – all changes and information data are updated and synchronized continuously. Relevant release information, such as metadata, important library changes, etc., are integrated with Serena Business Manager via the P4 TT Gateway.

Portigon also relayed how their approval process improved because of SBM.  Before a change goes live in production, it has to undergo two testing stages: the functionality test and the approval test. After the functionality test in the development environment, the requester gives his approval via Business Sign-Off. After the User Acceptance Test (UAT) in the integration environment, the requester gives the final approval. The audience was visibly taken by the idea that a sign-off can work fast, triggering the system without tedious Outlook e-mails. Simply via Serena Business Manager.  It was great to see their amazed faces.  For more about Portigon’s solution and success with SBM, take a look at their presentation from the event.