The only constant is change….

In the IT world, things change. And they change fast. How many laptops I’ve used in my career I couldn’t guess. How many servers I’ve accessed directly, or how many I’ve been using without even realizing it. Of course all of these would have changed and been updated or renewed regularly too. One of Micro Focus’ core tenets is that we bridge the old and the new, and nowhere is that more visible than in the evolution of workload migrations. Those machines that needed to change, be upgraded, replaced, altered or consolidated.

The fundamental technology to support efficient migration (movement) of workload (applications and systems running on a server or personal computer) is the PlateSpin product line.

What is now called PlateSpin Migrate began over a decade ago as PlateSpin PowerConvert, and almost immediately became the premier solution for migrating physical server workloads onto VMware virtual machines. As a reminder, the “server workload” is the software stack consisting of the operating system, application(s), and middleware…and of course any actual data residing on a server. It’s an elegant term to use in the context of migrations, because it’s independent of the underlying platform: a server workload can reside on (or in, if you prefer) a physical server, or a virtual machine.

Other companies followed with competitive products. The big virtualization platform vendors like VMware and Microsoft even got into the game, with tools to help customers move onto (but not out of, for obvious reasons) ESX and Hyper-V, respectively.

As Hyper-V, KVM, and XEN became more robust, enterprises realized that VMware wasn’t the only game in town, and they could actually run production workloads, not just test and dev servers, as virtual machines (VMs) on other hypervisors. That realization led to another innovation in workload migration pioneered by PlateSpin Migrate: the ability to move from one virtualization platform to another. Indeed, over the years we’ve seen a big shift in customer behavior, buying licenses more for Virtual-to-Virtual (V2V) migrations than for traditional Physical-to-Virtual (P2V) migrations. 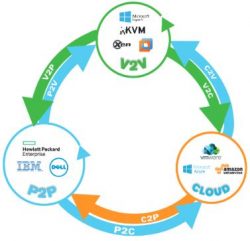 And the evolution hasn’t stopped there. In 2016, Micro Focus added Microsoft Azure cloud support to PlateSpin Migrate, and early in 2017 added support for migrations to VMware vCloud and Amazon AWS? Why? Because the cloud is where customers want to migrate their workloads to next. In their November 2016 FutureScape: Worldwide Cloud 2017 Predictions report, IDC predicted that “more than 51% of all organizations expect that within two years the majority of their IT capabilities will be delivered through some form of cloud service — public, private, or hybrid.”

Remember that bit at the beginning about bridging the old and the new? While migrating server workloads *to* the cloud may be the latest shiny new thing, those workloads have to come *from* somewhere: typically virtual machines running on an existing on-premise virtual host, but sometimes from (gasp!) physical servers. And guess what? PlateSpin Migrate supports migration from those Jurassic-era physical servers, running versions of Windows even Microsoft doesn’t support anymore, like Widows Server 2003 and Windows XP.

And the next generation of servers, however virtual? We’ll help our clients migrate workload there too. How’s that for bridging the old and the new?