Perception, collaboration and … the Six Nations? 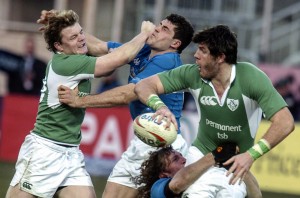 How does a recent rugby tournament link our funky new infographic and requirements management tool? Jonny Crawford, our Inside Sales Manager, explains.

Our Belfast Office is a melting pot of different languages and backgrounds. New joiners are always keen to get up to speed with UK culture and sport is a big help. Many of us, for example, really got into the RBS Six Nations.

As an Irish guy with many UK colleagues, the shared experience of England, Wales, Scotland and Ireland contesting hard-fought games over many weeks provides instant common ground. Believe me, when England beat Ireland a few weeks ago I had a lot of Newbury-based colleagues keen to get in touch…

The Six Nations also poses some interesting questions about how we see the players, because the Six Nations isn’t like any other sporting occasion.  Generally speaking, when teams play, say, a World Cup, the players disappear for the course of the tournament. But these guys play club rugby between Six Nations games. And that’s what makes it interesting.

Because as this blog points out, fans are constantly having to reassess their support based on their perception of each player. Why? Well, imagine I was an English rugby player – not something that comes naturally to me – but I would play for an English club. My team-mates and opponents are clearly defined. Then, on a Six Nations weekend, everything changes.

The guy I tackled/punched last week is now a team-mate. My best mate at the club is now an opponent and I have to hit him instead. Then it gets weirder. I am called up by the Lions.

The British and Irish Lions are a composite rugby side using players from the British and Irish national teams. They play ‘friendly’ fixtures against southern hemisphere sides. ‘Friendly’ is in quotes because, well, this is rugby and while players suddenly gain a bunch of new fans, his opponents also go up a notch, too.

So, how people see me as a player changes when I switch from club to country and again when I wear a Lions shirt. Perception is not be a universal truth. I’m the same guy but whether the fans boo or cheer me is based entirely on who I am playing for at the time. And maybe how well I play.

Infographic – the lighter side of software collaboration

Back to my industry – and I know a lot more about software testing than I do rugby. A software project delivery team has similar dynamics to sports teams. Every ‘player’ is important but how they see themselves – and how they think their team-mates see them – are not necessarily the same thing. This brilliant infographic makes the point really well. Check it out.

So how do we get these guys singing from the same hymn sheet? Like any team, they need a system that uses their talents and ignores team relations. A great manager sees beyond perceptions – and misperceptions – to deliver a great result.

Atlas 3.0 is a software requirements management tool that links requirements to development to achieve better results, faster. It works for waterfall and Agile teams alike.

As I mentioned in a previous blog, Atlas beats the bottlenecks between business and development teams by automatically collecting and translating status and progress information into clear business terms and expectations. That way, everyone gets the same information at the same time. No perception problems here.

So as you can see, Test rugby and software delivery are linked by more than a shared reliance on scrums, and rugby remains a great way of explaining otherwise complex concepts to new joiners who may be looking for a shared interest to help them integrate. But I struggle to make so many useful comparisons with other sports, though. Cricket, frankly, still has me stumped.