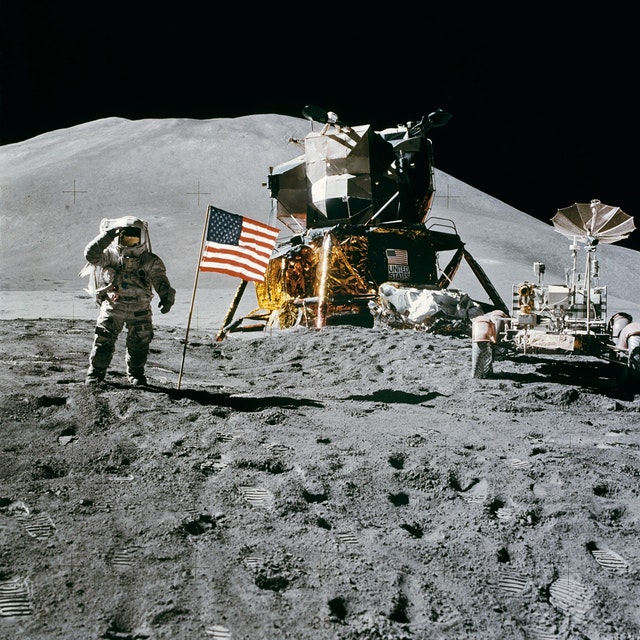 I’ve blogged about the world’s most famous agent and enterprise technology before, so the 50th anniversary of the Apollo 11 lunar mission prompted another blogpost on two of my favourite subjects.

Written in the stars

The Apollo 11 crew blasted off from Florida on 16 July 1969 on one of the riskiest and most ambitious journeys undertaken by humankind.

It was so risky it almost ended in disaster, a speech had already been written for President Nixon to announce to the world that the Lunar Lander, damaged on it’s descent to the Sea of Tranquillity, had not made the return journey successfully:

Thankfully, those poignant words remain on paper, and today the world can celebrate an incredible achievement.

Science is the winner

The Apollo 11 mission success was the culmination of years of investment and innovation following John F Kennedy’s public goal in 1961 announcing: “before this decade is out, of landing a man on the Moon and returning him safely to the Earth.”

IBM was selected as the IT vendor to provide the systems support and a vast team started working on the computers, the calculations and the infrastructure to achieve this lofty goal. Mainframe technology using PL/I code calculated the initial course, and 5 IBM System/360 Model 75 systems in NASA’s Houston-based Real Time Computer Complex calculated and recalculated trajectory, position, time, and flight path countless times during the mission enabling Neil Armstrong to famously announce:

‘That’s one small step for a man, one giant leap for mankind. Houston, Tranquillity Base here. The Eagle has landed.’

The dramatic technological advances in Space travel during the 1950’s sparked the world’s imagination, so it’s no surprise to me at all that 007 had already averted a threat to Global Extermination in Space 15 years before the moon landing. Ian Fleming’s 3rd novel ‘Moonraker’ was published in 1954 and took a further 24 years to hit the silver screen in 1979.

Just like the Apollo missions, the massive production budget raised many eyebrows. Just like the Apollo missions it was a tearaway success, and became the highest grossing Bond movie. 007’s 11th outing in the cinema was by far the most successful in the series and proved to be a very difficult act to follow, leading some to predict James Bond’s premature demise on the big screen.

Along with the 50th anniversary of the incredible Apollo 11 mission, 2019 marks some other landmark technical milestones. IBM’s CICS application server just turned 50 years old. COBOL will be 60 soon (Diamonds really are Forever) as James Bond himself turns 66.

Of course the basic ‘DNA’ of Space Travel, James Bond, IBM Mainframe Technology, COBOL, CICS, and PL/I hasn’t changed. Like any champion they’ve all stared down threats and taken the heaviest of body-blows during their existence. Just like a true champion they’ve also adapted, changed and come back on top, modernized and ready for the next challenge. An exciting new era of Space Exploration beckons with more lunar and Martian missions planned and space tourism becoming tantalizingly close.

So it may surprise some of you to learn that even today, IBM’s legendary  PL/I Mainframe programming language that powered the Apollo 11 underpins some of the world’s most economically powerful organisations.  To me, this is hard-and-fast proof that some of the best mission-critical systems known to man (PL/I, COBOL, CICS, DB2 and the mainframe) must be those that have celebrated milestones with James Bond since the 1950s. With these systems (and 007) it’s always just been mission possible. Adaptable. Portable (a ruggedized S/360 had been engineered down in size from a ‘wardrobe’ to a suitcase to accompany the astronauts in Apollo 11). Flexible. Single-minded in purpose. No room for error, no downtime, absolute precision and a value that just lasts and lasts.

Micro Focus, with its strategic objective of bridging the old with the new, is helping make PL/I future-proof for many years to come today…..

In 1979 (at eight years old) I remember being offered a great ‘deal’ while staying at family friends in Manchester. In return for attending Catholic Mass at the local church we could choose to see either ‘Moonraker’ or ‘BedKnobs and Broomsticks’ at the local cinema. It was my first James Bond movie on a big screen (many belated and heartfelt thanks Tom and Valerie for taking us). Later on that same day I also hurt myself by clumsily falling into a cellar whilst trying to emulate my double-o-hero. Perhaps that’s why my career path went in the IBM and Micro Focus direction instead of MI6?

Find me on Twitter if you want to talk more