With dozens of sessions, separate tracks and hundreds of delegates, SHARE is never a single-topic conference. However, the phrase Digital Transformation won the popular vote hands down at this year’s event, in San Jose, Ca. From keynote to technical session to corridor discussion, how the mainframe plays a central role in being part of organizational transformation in the digital age was this year’s hot topic. 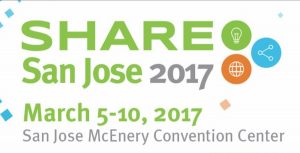 But what is it? What does transformation really mean, and what is unique about the digital age that affects it? And how does this impact the mainframe?

“In its simplest form, it is all about being able to transform the business, enabled by technology”, says Mark Wilson, SHARE Speaker and mainframe security guru. In his session at SHARE’s EXECUForum, he argued that transformation aims to “support a culture of change…[and to] empower innovation.”

In one of the keynote sessions, industry commentator Peter Ruttan of IDC described the impact on the mainframe world, saying that progressive organizations are integrating and modernizing mainframe operations as part of their transformational process, such that they aspire to having “a connected mainframe” that sits at the heart of a digital organization, not apart from it.

Considerations shaping how transformation could be achieved were then woven throughout the week’s sessions. In high demand were topics of Workload Management, IT Security and DevOps. 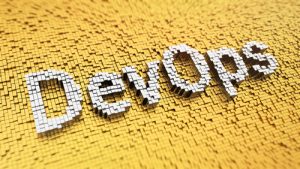 In the digital age, argued Peter Ruttan, “workload should run where it should to best support the business”. In a business-first mantra, technology serves the strategy, not sets it. Workload management was in evidence across a variety of sessions – IBM themselves talked about all manner of new workload possibilities, on z/OS and on Linux, during their EXECUForum session. One significant detail is that 93% of the top mainframe clients were also now running Linux.

IDC talked about half the clients they spoke to seeing a lower cost of ownership on the mainframe as a result of looking at workload changes. New workload choices around Cloud, Linux, Web/Mobile Integration, Java integration, were all shaping how the mainframe was being seen as a source of new revenue, rather than a necessary cost to support it.

Perhaps the most tangible example however came from Micro Focus Partners Astadia, who spoke lucidly of their European banking client who had taken the decision to move a huge new set of core workload on to z series. Consolidating older server environments as part of a major modernization program, the major French bank used Micro Focus enterprise technology, Astadia’s services and tools, to move a core trading system on to the IBM mainframe platform. A truly exciting transformation story.

“Industry commentators confidently expect a financial services organization to be on the brink of extinction due to an IT security breach in 2017” said Mark Wilson, RSM Partners, in his mainframe security session. AirBnB have more beds available for hire than Marriott and Hilton combined, and the disruptive digital age is upon us, are mainframe CIOs “really going to open up our core mainframe systems to a bunch of smart devices, whenever they want?” asked Mark. Of course, they answer is that they have to.

But, the conversation went on, with cyber-crime “being so lucrative,” controls were absolutely necessary. “Two-factor authentication for the mainframe is a must”, he concluded.

And managing the mainframe world against the “security kill chain” with an effective cyber security program, and supporting cultural, technological and business change, was a similar thread woven into the Micro Focus mainframe security talk, led by Dave Fletcher and Barbara Ballard. Additional controls in the mainframe environment available from Micro Focus help resolve the risks and concerns mentioned by Wilson and many others. 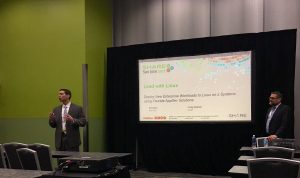 Later in the week, Kevin Parker’s 10 minute tech talk session on accelerated software delivery was as illuminating as it was entertaining for the spellbound crowd. Kevin, alongside Mark Levy, gave further sessions on DevOps, a topic that remains hugely popular with SHARE delegates.

However, my personal favourite was to witness all guns blazin’ at the IDE Shootout session. While 3 vendors pitched up and gave their own talk in turn, this was a shootout of everybody against ISPF. Host and IBM luminary Rosalind Radcliffe was at pains to point out “we want to show that ISPF just isn’t the right way to do mainframe development any more”. The evidence reinforced her belief. While other vendors took their turn, Micro Focus’ Bob Schoppert stole the show once again with a lucid whistle-stop tour of how application developers of today have advanced technology to support critical processes, high quality and enhanced team collaboration. The room was packed for another master-class in modern mainframe application development.

As part of its ongoing commitment to the enterprise IT community, Micro Focus boasted an unprecedented number of hosted sessions. Next time we aim to be there in force again. Digital transformation is sure to be among the topics. If you are looking to transform your mainframe environment, talk to us.