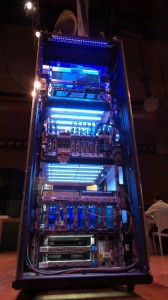 Linux continues to gain in popularity, and there are more deployments each year, even in the mainframe world. What’s driving all the interest and, frankly, all the workload? We deployed Derek Britton to find out.

Reports suggest that there continues to be a significant uptick in the number of deployments on to Linux servers worldwide. In November 16’s IBM Systems Magazine article “Why more z Systems customer are running Linux”, for example, we are told that “nearly 50 percent of z Systems clients are using Linux”. We also know that Linux overtook other UNIX systems in terms of market share as far back as 2013 (source: Linux Foundation).

Now, across the broader market, what incarnation of Linux might be chosen is a topic all of its own. Data centers running Enterprise versions of RedHat, SUSE or Oracle variants is an option, as is using a Linux-based Cloud deployment, as would be the ground-breaking LinuxONE technology or the new Linux on Power platform from IBM, or indeed running a Linux partition on their mainframe. The flexibility, choice and power is certainly there to leverage.

One of the obvious questions this throws up is what sort of workload is being deployed on to Linux? Or, put another way, what is driving organizations and their IT teams to choose Linux (or any other modern environment for that matter) as a production environment? The aforementioned IBM Systems Magazine article confirmed that IBM has (Linux) clients “doing payments, payroll, mobile banking … critical applications”. It goes without saying that some production workload is much more at home on z/OS, but IBM sensibly provides the options the market is clearly looking for in the digital age.

And tempting as it might be to talk about all the benefits of Linux, open source and other recent innovations from the vendors, this isn’t what drives change. Businesses drive IT innovation – changes in circumstances are behind many of the smartest IT decisions. Necessity is the mother of invention, or in this case innovation. So what are those needs?

One of our clients looked at branching out into new territories. Their core systems needed to be replicated across new data centers in each country, a fairly typical situation. However, the uniqueness and scale of the operation made matters difficult for provisioning IT operations as quickly as the business plan wanted. They were looking for a faster way to have tried-and-trusted IT systems up and running, supporting their new regional centers.

A financial services client was also looking at international expansion. However, due to data privacy laws in the new region, they were unable to manage the new operation from their head office. Instead, they needed to establish the right – low-scale, yet compatible – IT footprint in the new region. The question therefore was what viable options could replicate existing mainframe business functionality at a lower scale?

A very successful mainframe applications provider with an aggressive growth strategy was looking for further market opportunity. They identified that their market penetration and growth plans precluded them from establishing sufficient growth with their existing model. One important option to them was to investigate reaching clients in their market who were currently not using their prescribed deployment platform. Simply put, they needed to explore more platform options to support market growth.

Getting Fit for Purpose

New demands of fresh, critical workload create questions about priority and bandwidth. Some clients we know have adopted a headlong approach into big data and in-line analytics. Their view is there is no place better than z/OS to run these core operations. The question this creates is how to provision the necessary headroom without incurring unplanned increases. Of course, there’s always a commercial answer, but oftentimes the capacity available on Linux is simply waiting to be leveraged. Sometimes, some traditional z/OS workload might not all be equally important – some of it might be a historical circumstance. It then becomes a question of choices. Moving standalone priority B workload around might be viable and support higher priority z/OS projects.

The above scenarios represent real situations faced by large enterprises. What do all these drivers have in common? Probably the simplest way to label it is the issue of flexibility. Responding to change, rapidly, is driving IT innovation. Finding smart ways to deliver bomb-proof systems – core applications that already add value, already support the business – into new channels to support, quickly, going into a new territory, splitting data centers, reaching new clients, sometimes where the traditional platform isn’t appropriate for the model, is the demand. Linux makes sense as a viable, enterprise-scale solution in a growing range of cases.

…and so is the application!

For so many of the world’s largest IT organizations applications literally mean business. They keep the operations ticking over, and without them the organization would be unable to function. Many of those systems have been relied upon over years, built on the solid foundation of the COBOL language. COBOL’s continued evolution in its 6th decade, and Micro Focus unrivalled support of COBOL across dozens of leading platforms mean when bullet-proof core systems need contemporary levels of flexibility, COBOL and Linux are the natural, low-risk option. It’s no wonder that Micro Focus sees more and more Linux deployments of COBOL applications than ever.

Is Linux alone here? Not at all. One could easily argue that other UNIX variants and Windows are viable production systems for many application workloads. That’s not the argument here – platform viability is the choice of the customer. What’s important is that organizations need to be able to make smart decisions to support rapid business change. Advancements in technology such as Linux, alongside the power and portability of COBOL, help them do just that.