How COBOL has stood the test of time 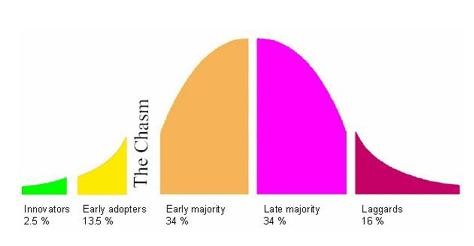 Roger’s adoption curve is a well known model which shows how new ideas and products get adopted over a given time-frame. Basically, things start relatively slowly, there’s an accelerated mid-phase where a majority of the audience ‘buy in’, and then there’s a decline to a small remainder.

Once over a certain point, a growing trend takes on a life of its own and becomes self-fulfilling. Commentators from Geoffrey Moore[1] to Malcolm Gladwell[2] have attempted to describe how to get up (and over) the steep initial slope of the adoption curve – the Chasm. Once you’re over this, though, and on an upwards trajectory the benefits are impressive. Buying decisions, particularly in risk-averse corporations, will go your way as businesses opt for tried-and-trusted solutions to their business pains. A winning formula will be re-used as often as possible, especially if the cost of bringing it on board in terms of skills and technology is relatively low.

Right from the outset in 1959 COBOL immediately presents an attractive proposition as a relatively low-cost, innovative IT power… before it was called IT, of course. The language’s ability to charm the business community lay behind its take up – after all, it wasn’t called the Common Business Object Language for nothing. Within a decade, long before the appearance of other languages we know today, COBOL was the ‘go to’ language of data processing for the business world.

In the run-up to a marketing event a few years ago  Micro Focus surveyed the industry and drew some pretty illuminating statistics[3] about the ubiquity of COBOL in the workplace. 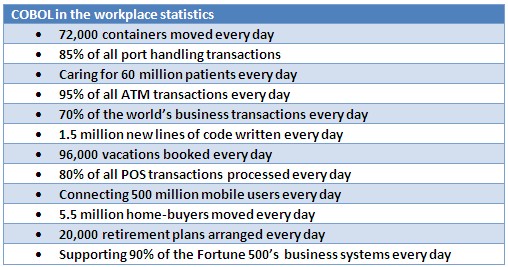 Other data regarding overall volumes of COBOL code suggests that:

This indicates COBOL’s place in IT and in the business world as a whole. This volume of code and level of investment – especially given the importance of some of the business functions it provides – creates a lasting heritage.

Was the proliferation of COBOL over the decades inevitable? Was it because there was nothing else around? No. By being smart about its market position and its target audience, COBOL gave itself the very best chance for survival.

Over the years COBOL’s highly reusable nature has seen it pervade across the enterprise. After all, why write applications from scratch if the business function already exists? Why risk application failure and undergo the cost of investing in similar capabilities, when an existing one can be re-used and refined to do a new task? The answer is most people didn’t take the risk, and chose to exploit the COBOL systems they had.

Also, how did organizations whose reliance on COBOL deepened through a ‘re-use’ policy meet the growing skills challenge? In fact, it was simply down to COBOL’s ease of learning and highly readable format. These enabled resource pools to be flexed and scaled out easily. What’s more, its popularity – then without question – ensured there was a ready supply of programmers willing to take a role.

Today that skills pool may look markedly different – the programmers who cut their teeth on COBOL have aged, and subsequent generations of programmers have been brought up on different languages that reflect the changing IT landscape. Now, there is more code than ever before, more opportunities for re-use and continually evolving requirements to deliver existing business functionality into new channels and across new devices.

In short, the COBOL heritage is as valuable today as it ever was.

The demand for skilled COBOL programmers remains strong. According to Simply Hired, COBOL jobs listings have increased over 100 percent since November 2009[4]. Over 100 universities have recognised the opportunities this presents and have signed up to the Micro Focus ACTion program[5] which provides free access to the latest technology and teaching tools for enterprise application development. Around 9,000 students graduate every year with vital COBOL skills.

The continued investment in COBOL over the years means that today’s IT teams can create exciting user interfaces using latest technologies such as WPF, JavaFx, HTML 5 or Silverlight to wrap around proven business logic implemented in COBOL. XML integration means that COBOL applications can be deployed as web services in the cloud as servicing applications, developed to run on iOS and Android platforms. COBOL’s place in the next generation is already proven.

According to research by the Standish Group[6], organizations consider re-using or “modernizing” existing COBOL-based systems to be a better option than re-writing or replacing the application with an off the shelf packaged solution – risking the valuable IP that was written into the COBOL over the years. For cost, risk, competitive advantage and time-to-market reasons, the value of the COBOL heritage seems set to last into the future.