How a Financial Services Firm Centralized Their Release Management Process 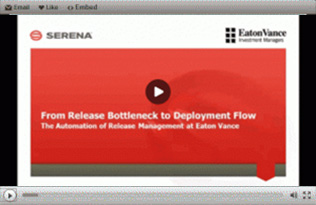 Recently, I was talking to a financial services company during one of Serena’s DevOps Drive-In webcasts.  It was a wonderful story of the evolution of a release process over time and the benefits that were realized.

The company went from having multiple teams that did release management in a slightly different way and communicating via email, to communicating changes via SharePoint, and finally having both the process layer and automation captured in a single solution based on Serena technology.

I’ve worked in a release team myself and I can totally relate to what was said in the webcast.  Having multiple teams all doing things in a slightly different way is extremely inefficient and also encourages mistakes to be made.  In my personal experience, when there are multiple releases coming out and I’m busy, tired and under pressure, it’s difficult to remember the slight variations from one product to the next.

I also understand the company’s idea of moving to SharePoint to help solve part of the problem. I seriously considered it but it is, at best, a loosely fitting Band-Aid, not a long term fix.

I’m sure you might have heard me say or write that automation alone isn’t enough.  This webcast was a wonderful example of that.  I could go on but it’s much more powerful for you to hear this from the customer.  There are two versions of the recording, a short 12 minute version and the full recording.  Both are well worth your time.