Get the Full Story with Social Media Archiving 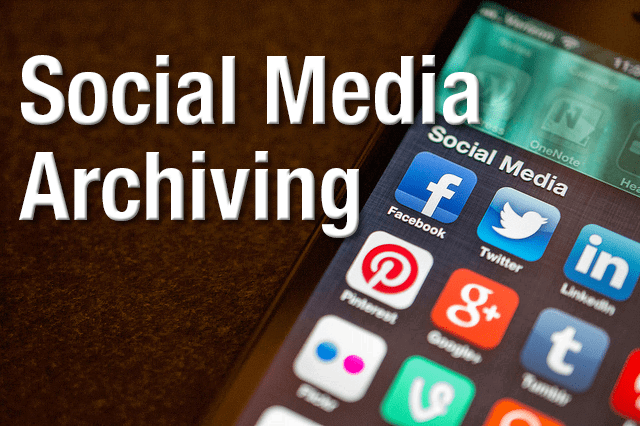 Social Media is one of the largest sources of information available in today. It is a melting pot of images, messages, videos, locations, statuses, and more. In many cases, it precedes a person or organization in anything that they do. When somebody wants to learn about anything – people, organizations, events – they quickly resort to social media to get the answers they are looking for. Just ask your boss if he or she looked you up on Facebook before you were hired!

The world of litigation, court cases, lawyers, and judges are also resorting to social media for information. You can be certain that it can and will be accessed. It is critical that your organization uses this to its advantage. Take, as an example, a case in New York where social media determined the entire outcome of the case. A man was accused of a mugging and pleaded innocent, claiming that he was in his apartment twelve miles away when the incident happened. Despite presenting all the evidence he could, the court ruled him guilty and he was put in jail. Two weeks later, his father stumbled across a Facebook status that shed light on the situation in the unique way that only social media can. By taking the status to Facebook and having it verified, it was proven that not only was he involved in different activities at the time, but that the status was posted from twelve miles away and one minute before the mugging took place. This strong evidence exonerated the young man and he was immediately released from jail. This is just one of many examples of social media playing a key role in court. As it was with this case, having this information ready and available for use in court will make a big difference for any organization.

Furthermore, a new version of the Federal Rules of Civil Procedure went into effect December 1, 2015. This new version outlines the requirement to produce social media evidence in court and gives it at least equal weight and import as other forms of ESI (electronically stored information), such as email and documents.  Subsection 37(e) replaces the previous subpart in its entirety, and features a new title: “Failure to Preserve Electronically Stored Information.” In addition to this amendment to the previous rule, Rule 37(e) is accompanied by official Committee Advisory notes that clearly call out counsel to preserve clients’ ESI, and that counsel should. “… become familiar with their clients’ information systems and digital data – including social media – to address these issues.”  To read the full text of the FRCP, visit https://www.law.cornell.edu/rules/frcp/rule_37

Why is social media so effective?

Much more can be learned about any situation by looking at Facebook, Twitter, Instagram, etc. than simply looking at emails. People are more expressive on social media than anywhere else, because that is exactly the point – to express yourself. People say, show, and express things on social media that they wouldn’t in a simple email. Having said that, you can make social media an asset for your organization. While many companies settle for just archiving email, those that make the investment in archiving social will come out on top in compliance and ediscovery. The difference is like reading a book by moonlight vs. reading it in the broad daylight. Social media shines more light on any situation, and if you have it as part of your archive, you will be more prepared, credible, and informed.

This point is further illustrated by this infographic, which shows the relevance of social media in court cases in general. The author states that “People are using social media more than ever before. If you’re not using social media to make your client’s case, you’re doing a disservice to your clients and may even be placing them at a disadvantage.” They also assert that social media is especially useful in cases of personal injury, employment, family law or bankruptcy, and criminal law. At GWAVA, we affirm its relevance in all of these, and we have seen that it is especially relevant in cases of compliance and protection of proprietary/sensitive information – especially in highly regulated industries. The risks involved here are simply not worth taking on alone. This is where we step in to help!

Retain Unified Archiving is now integrated with ArchiveSocial to bring you the most complete social media archiving experience on the market. ArchiveSocial fits perfectly into the Retain infrastructure so that all of your social media data can be stored in one unified, secure, and searchable archive along with your email and mobile data. This is the Retain difference, and is why Gartner named Retain “champion” and “overall best value” in the archiving market. With all of your social media data archived, you can rest assured that you will be prepared for any situation that comes your way.

How does it work?

ArchiveSocial’s home page will give you a quick demo of the solution. Simply enter your Twitter information, and it will be given the option to authenticate ArchiveSocial on your account. From there, your data will be captured and archived. When paired with Retain, a similar process occurs. ArchiveSocial is authorized on the account and immediately begins capturing data using the same collector. This information is then sent to Retain, where it can be stored along with all your other data. This is advantageous, because it allows you to use Retain’s diverse and powerful toolset to complete tasks. Information is stored in the secure Retain archive, where it can be easily organized and searched. There, it is timestamped and protected from tampering. All necessary metadata, of course, is stored along with the record. (Read about the importance of metadata here).

Retain doesn’t stop there. Having a complete, easily searchable, archive would be useless without the ability to make that information presentable in a court of law. Retain excels in this area. All records can be redacted. This means that any sensitive information, such as financial records, social security numbers, or other data that needs to be secured can be filtered off the record  while still maintaining the record’s integrity. That information can then be exported into various different formats and effectively used in any litigation case.

To help you learn more about the need to archive social media and how it works with Retain and ArchiveSocial, there will be a webinar on October 25 at 1:00pm Eastern. Be sure to register now!

How do I get started Archiving Social Media? Click here to get a FREE quote.