Get $20 of coffee on Doug Serena, CIO 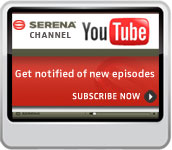 Today we kick off the latest Serena Twitter contest!

We launched the Doug Serena, CIO web miniseries a couple of weeks ago and it’s already a big YouTube success. To add to the fun, we decided to kick off a related Twitter contest. This scavenger hunt-style trivia contest offers @DougSerenaCIO Twitter followers a chance to win Starbucks Cards for watching the series and answering simple questions about his show.

Anyone care to guess where in the world Doug and his wife are hoping to travel on the trip mentioned in episode three? There is a hint in the episode of a certain mountain that might be close to their destination. Figure it out and you could win the prize.

Each business day, our favorite CIO will pose a question like this via Twitter about a past episode of Doug Serena, CIO. Anyone who follows @DougSerenaCIO and watches the miniseries can easily find the answer and submit for a chance to win a $20 Starbucks Card.

Questions can come at anytime of the day, so make sure you are keeping an eye on @DougSerenaCIO via Twitter. When you know the answer to one of the Doug Serena, CIO trivia questions, just tweet it to Doug!