Mark Levy reports back from #DOES16 in San Francisco – is this is the year that DevOps crosses the chasm? What did he find out from the experts like Gene Kim? Read on to find out the answers and more in this fascinating blog….

Last week I attended the DevOps Enterprise Summit (#DOES16) in San Francisco which brought together over 1300 IT professionals to learn and discuss with their peers the practices and patterns of high performance IT for large complex environments. One of the first things I noticed was that the overall structure of the event was different from your standard IT event.  All the sessions over the three-day event followed an “Experience Report” format. Each session was only 30 minutes in length and each speaker followed the same specific pattern, which enabled current DevOps practitioners to share what they did, what happened, and what they learned. The event also had workshops leveraging the “Lean Coffee” format where participants gathered, built an agenda, and began discussing DevOps topics that were pertinent to their particular environment.  In my opinion, these session formats made the overall conference exciting and fast paced.

One question remained a focus throughout the event: “Is this the year that Enterprise DevOps crosses the chasm?” #DOES16 seems to believe so. The main theme for this year’s event was “Leading Change”. Gene Kim opened the event by highlighting results of the latest DevOps survey which found IT organizations that leveraged DevOps practices were able to deliver business value faster, with better quality, more securely, and they had more fun doing it!  With over four years of survey data, we now know that these high performers are massively out performing their peers. The focus of #DOES16 was to provide a forum where current DevOps practitioners from large IT organizations were able to share their experience with others who are just starting their journey. DevOps transformation stories from large enterprise companies such as Allstate, American Airlines, Capital One, Target, Walmart, and Nationwide proved that DevOps is not just reserved for the start-ups in Silicon Valley.

There were also several new books focused on DevOps practices launched at #DOES16.  Gene Kim, Jez Humble, Patrick Dubois, and John Willis collaborated to create the “DevOps Handbook”, and renowned DevOps thought leader and author Gary Gruver released his new book “Starting and Scaling DevOps in the Enterprise”. Both books focus on how large enterprises can gain better business outcomes by implementing DevOps practices at scale and in my opinion are must reads for DevOps practitioners as well as senior management. 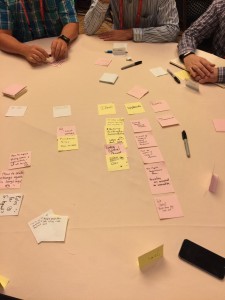 It’s a Journey from “Aha to Ka-Ching”

DevOps is not “something you do” but a state you continuously move towards by doing other things. it’s a journey of continuous improvement. During the event, several companies highlighted that it’s a journey of experimentation, accepting failure along the way, while also incrementally improving the way they build and deliver software. There were some excellent case study presentations. For example, Heather Mickman, Sr. Director of Technology Services at Target, has presented three years in a row and showed how a grassroots, bottoms up DevOps transformation at Target has enabled the company to enlist the support of executive management. Target was able to scale software deployments from 2-3 per day in 2015 to 90 per day twelve months later.  The Target team achieved this by aligning product teams with business capabilities, removing friction points, and making everything self-service. What’s next for Target?  Take everything to the cloud.  The journey continues.

If you want to go far, go together

Leading change was the main theme of the event and was highlighted in many different ways. For example, Microsoft discussed their new vision of enabling any engineer to contribute to any product or service at Microsoft, thus leading the change to a single engineering system. Engineers follow an “engineering north star” with the objective that dev can move to another team and already know how to work. Leading change does not just focus on new innovation. DevOps is also about innovating with your “Core”.  Walmart’s mainframe team took the lead and created a Web caching service at scale that distributed teams could leverage. While both examples show how technology is being used to move forward together, there has to be a culture that supports this type of high performance. Many sessions focused on how to build a generative culture and the leadership that is required to change people and processes.

Creating a culture that supports a successful DevOps transformation is such an important topic, that I have invited Gene Kim to come on our next Micro Focus DevOps Drive-in, December 1, 2016 at  9am PST to discuss the research he conducted while developing his latest book, “The DevOps Handbook”, and techniques to build a culture of continuous experimentation and learning. Hope to see you there!