Delving into DevOps – the Data

The Customer, DevOps and Micro Focus

Recently, we’ve been speaking frequently with our clients about the popular DevOps topic, and we are hearing more examples of its implementation, usage and success. Lately, we heard of one client who has built a DevOps framework at the centre of their entire IT operation; we have seen another client recruit a new CIO specifically because of his DevOps experience.

… oh, and everyone else

This is indicative of a broader industry appeal around the topic. According to one observer, “we are seeing the gold rush phase for DevOps in 2015[1]”. Consider just a few of the public events around Devops in recent months:

Each of these will no doubt repeat in 2016, joining the Cloud and DevOps World Forum – and that’s not to mention the plethora of vendor-specific events that will showcase their own DevOps angle.

Read all about it

Of course, there’s no need necessarily to travel to learn. Publications on the topic are wide and varied ranging from the highly accessible Mainframe DevOps for Dummies (by IBM luminary Rosalind Radcliffe, as launched at SHARE, August 2015) to the acclaimed and comprehensive Phoenix Project by Gene Kim. Meanwhile, taking that knowledge further presents seemingly limitless possibilities. Devops-related certification, training, press articles and blogs is seemingly limitless, as are the mentions of DevOps as a key element of many a vendor’s messaging today.  (I can’t tell you how many times I have read a vendor promote that they are “The Devops Company”).

Now, while it could be argued that some of the DevOps documentation is slanted according to the perspective of the authors, this is often the case while new trends emerge and attempt to define themselves clearly. Establishing a de-facto “truth” from the various viewpoints is often the task of broader surveys and industry studies. A CA study from 2013 suggested tangible results  and inferred at least some direction on how the industry was embracing the idea. More recently, another global survey was conducted byDevOps.com which may – we anticipate – provide further insight.

A third example of an industry study is the far-reaching and illuminating 2015 Annual State of DevOps: “A global perspective on the evolution of DevOps”, conducted by Gleanster/Delphix.

The study surveyed 2,381 IT practitioners or leaders from across the globe, including 49% at CIO or IT Director level.  The appetite and effort towards DevOps adoption was evident in the response – very interestingly 73% of those surveyed had already set up a dedicated DevOps group. Other results include a number of interesting perspectives that Micro Focus shares. 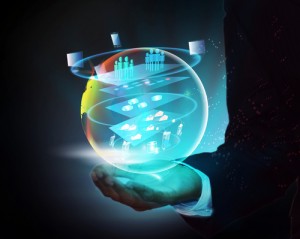 The study makes interesting reading. DevOps enjoys growing clarity, purpose and investment, yet faces significant ongoing challenges. Aiming towards faster delivery, higher frequency and better bug detection will improve results and reputation, such that the hope will catch up with the hype.

Fixing such specific challenges in the delivery cycle is the cornerstone of the Micro Focus solution for mainframe DevOps: providing practical solutions to real industry challenges. We look forward to the debate continuing.

[2] Most popular was agile data management