Analysts, industry commentators and – most importantly – frustrated RBS, Ulster Bank and NatWest customers took to Twitter, keen to remind RBS that their latest IT-based debacle is by no means their first offence. Their most recent attempt to stretch the definition of the word ‘glitch’ was predictable to those of us familiar with their IT infrastructure and deeply irritating for those trying to access their own cash.

And as wearily familiar as the story itself – a host IT failure inconveniencing customers – were the excuses. Perhaps the RBS public relations machine has seen more investment than the IT running their banking operations, because it seems more than half a million HMRC payments had, apparently, not ‘disappeared’ at all, but were merely “delayed.” And although the problem had been “fixed”, customers would be denied access to their child or working tax credits for at least another 48 hours. Remember – these are benefits payments. Two days is a long time to wait for food.

After the comments, the reality

The footnote of an online story is rarely a repository of reasoned argument. Indeed, if you want sensational journalism and conspiracy theories then the comments section of the Mail Online usually has what you need. But the ‘Related Stories’ section after this Finextra blog is more interesting. Note how every other story relates to a meltdown, or the fine that follows it.

That’s because anyone who understand mainframes and COBOL won’t buy the legacy technology/glitch excuse. With proper investment, older mainframes running COBOL applications run just fine. As this blog points out, the DWP make 2.5m benefit payments every single day without a problem. Indeed, some high-profile organizations are using similar tech to defend whole countries and launch rockets: the US Navy is at the forefront of technological breakthroughs and NASA is helping to push back the boundaries of human understanding. No glitches there.

Our own Andy King didn’t buy the glitch angle when RBS tried it last time. Iain Chidgey of data management company Delphix, points the finger at insufficient testing. A distinctly unimpressed Vince Cable suspected “skimping on large-scale investment” is NATS systems when thousands of airline customers were left grounded by a similar computer schism. There are so many more examples. 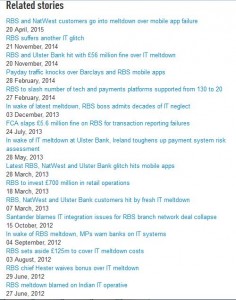 After RBS let their customers down on – of all times – Cyber Monday, Group Chief Executive Ross McEwan described the failure as “unacceptable” and issued a heartfelt mea culpa: “For decades, RBS failed to invest properly in its systems. It will take time, but we are investing heavily in building IT systems our customers can rely on.” All good, but that was in 2013 and two glitches ago. And despite a £750m improvement programme, we seem to be no further forward. Where exactly is this “heavy investment” going?

To be fair, there has been work. But nothing beyond a low-level and inevitable ‘consolidation’ exercise that any large organisation would do to as a by-the-numbers efficiency drive or cost-cutting exercise. No-one is suggesting that these systems are not old. Clearly they are. But properly supported, older technology helps NASA send probes to Mars. And customers of other banks access their cash.

Perhaps the issue is that RBS think they are, like many other mainframe owners, fighting fires on too many fronts to enable the innovation that could help their systems deliver modern performance from an older footprint. Banking is heavily regulated, so meeting compliance targets are a challenge. Every organization with an IT function has an IT Backlog. So there’s another. Perhaps their investment is being swallowed up by these activities that do little more than keep the lights on.

RBS recently announced better than expected financial results with pre-tax profits expected to double to £2.65bn. So the money is there. Well, let’s hope so. Imagine if the funding they had committed to application modernization and innovation was to be “delayed”? In a world where a business reputation can be destroyed in the time it takes to tweet, it makes sense to invest in core systems rather than PR. Micro Focus Mainframe solutions can enable long-established enterprise applications with modern functionality. Find me on Twitter if you want to talk more….