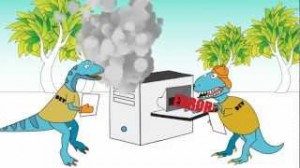 We premiered our latest video in front of 1,500 people this week at the Pink13 conference.  You never know how these things will be received until they air, especially when they’re supposed to be funny.  I like to think I know funny, but I’m darn sure I know laughter, and I’m pleased to report that the Change & Release Dino video triggered uproarious laughter from the assembled throng.

The laughter was so strong at the end that it obscured the video’s tagline, which is that Serena is your solution when you need to go from request-to-release in less than an eon.  And that’s no joke.