Trends come and go in the IT industry, and predictions often dominate the headlines at the turn of the year. Speculation and no small amount of idle guesswork starts to fill the pages of the IT press. What welcome news therefore when Arcati publishes its annual Mainframe Yearbook.  Aside from the usual vendor-sponsored material, the hidden gem is the Mainframe User Survey. Testing the water of the global mainframe market, the survey aims to capture a snapshot of what Arcati describes as “the System z user community’s existing hardware and software configuration, and … their plans and concerns for 2017”.

While the sample of 100 respondents is relatively modest, the findings of its survey conducted in November 2016 were well worth a read. Here are a few observations from my reading of the Report.

The first data point that jumps off the page is the sort of organization that uses the mainframe. A couple of questions help us deduce an obvious conclusion – the mainframe still means big business. This hasn’t changed; with the study revealing that over 50% of responses have mainframe estates of over 10,000 MIPS, and nearly half work in organizations of more than 5,000 employees (major sectors include banking, insurance, manufacturing, retail and government). Such organizations have committed to the mainframe: over a quarter have already invested in the new IBM z13 mainframe.

A few other pointers suggest the trend is upward, at least in terms of overall usage. Nearly half are seeing single digit MIPS growth this year, while nearly a third are witnessing over 10% growth in MIPS usage. For a hardware platform often cited for being in decline, that’s a significant amount of new workload. While the survey doesn’t make it clear what form that increase takes, I’ve published my view about that before. Whatever the reason, it seemed unsurprising that the number of respondents who regard the mainframe as a “legacy platform” has actually reduced by 12 percentage points since the previous survey.

Linux is in the (Main) Frame

The survey asked a few questions about Linux in the mainframe arena, and the responses were positive. Linux on z is in play at a third of all those surveyed, with another 13% aiming to adopt it soon. Meantime, IBM’s new dedicated Linux box, LinuxONE, is now installed at, or is planned to be, at a quarter of those surveyed.

With a mere 5% of respondents confirming their use of DevOps, the survey suggests at first glance a lack of uptake in the approach. However, with 48%  planning to use it soon, this makes a majority of respondents on a DevOps trajectory. This is consistent with a growth trend based on Gartner’s 2015 prediction that 45% of enterprises will planning to adopt DevOps (see my blog here). Whatever the numbers turn out to be, the trend looks set to become an inextricable part of the enterprise IT landscape.

Considering the line of questioning around cost of support compared various platforms it only seems  worth mentioning that the author noted “Support costs of Linux and Windows were growing faster than the mainframe’s”. The issue around “Support”, however, did not extend to asking about available skills or indeed training programs or other investments to ensure support could continue.

It is hard to make any material observations about the mainframe in the broader enterprise IT context because there was no questioning around multi-platform applications or workload balancing, where a hybrid platform model, with a mainframe at its core, serves a variety of business needs, applications and workload types. So often, the mainframe is the mother-ship, but by no means the only enterprise platform. For the next iteration of the survey, we would welcome further lines of questioning around workload, skills, security and cloud as sensible additions.

There are a small number of important independent perspectives on the mainframe community, about which we report from time to time, and Arcati is one such voice. The survey reflects an important set of data about the continued reliance upon and usage of the mainframe environment. Get your copy here. 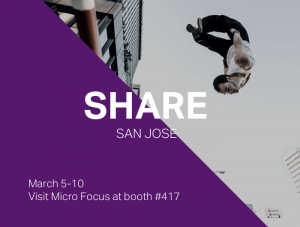 Another such community voice is, of course, the annual SHARE event. This year it takes place in San Jose, California. Micro Focus will be there, as part of the mainframe community. See you there.