An experience that worked…. 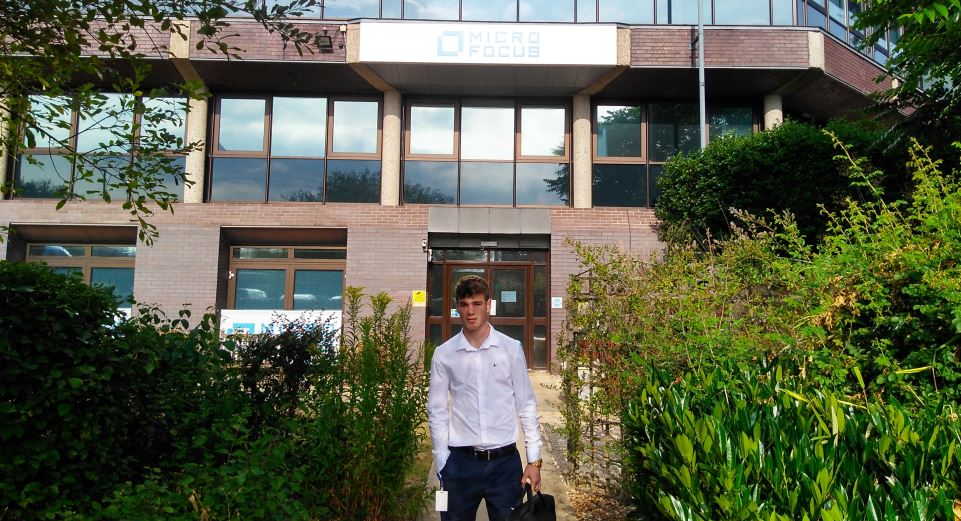 Year 10 Kings School Winchester pupil James Gale wasn’t looking forward to a week in a real office. Would he end up regretting his choice? Read the blogpost to find out how he got on at Micro Focus HQ in Newbury…..

The day started fairly early, but I am used to early starts as I do the Hursley village paper round, so that didn’t bother me.

We arrived at the Micro Focus headquarters and went to check in at reception. First I needed to be photographed for my badge, which gave me access to the building all week. Then I spent my first hour setting up my computer and login with Russell from the IT department. Shortly after I was had a short safety brief with the receptionist Denice who told me where the fire exits were and what to do in an emergency. There’s a lot to take in in an office but I found out they have free tea, coffee and soft drinks which was excellent. 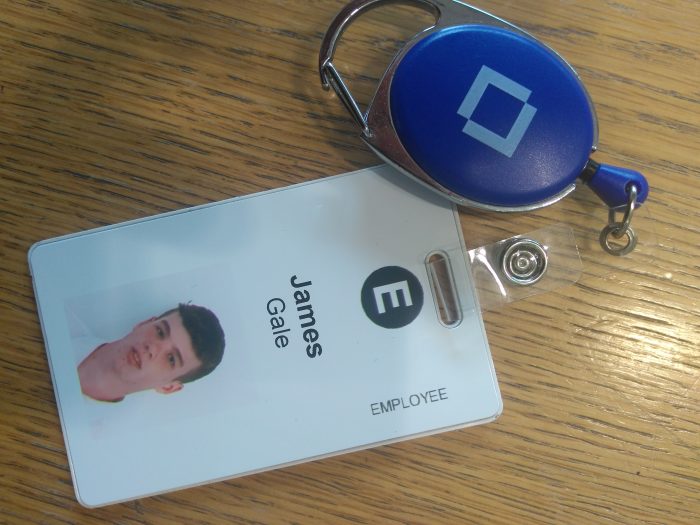 I was then given a talk by Derek Britton on what Micro Focus actually do, how they make software for businesses’ mainframe computers and he spoke about one of his new projects Enterprise 4.0 (more on this later)!

Mark Plant (my boss for the week), spent time with me to explain Digital Marketing and how industry has changed over the last few years.

More and more buyers research products online rather than going to ask in shops. Also the people that know about and specialise in the product now use Social Media instead of actually meeting up. Marketing now has to provide these buyers with information that educates them on products that will help them solve problems. Mark also taught me about the different types of online marketing such as pay per click, remarketing and display advertising e.g. pop up ads and banners on websites. We went through the importance of Search engines and Social media for a business these days. Wow! Without all this any business is going to struggle and all the information has to be really good and look great too!

I also had no idea that Google changes its search algorithm that many times a year. (Later I am going to use Google to find out what an algorithm actually is * – )

Mark then gave me my tasks for the week. I have to create an audit of the Corporate YouTube Channels (which contain great videos but this content isn’t being widely shared right now). I am to provide the Social Media team lead by Stephanie Wisdom with a schedule of Social Media posts to promote and get more traffic to the YouTube channels. Yikes.

In the morning I spent my time creating social media posts for Twitter and Facebook to advertise the Micro Focus YouTube channel. I decided to create an excel spread sheet with all the relevant videos, categories and captions to go with them. I also added screenshots from points of interest in the video to be posted alongside the URL so the team had visual imagery to help them promote it (apparently this helps). Designing the spreadsheet was pretty hard, but I wanted to make it really helpful for the team and easy to use! Here’s what I came up with: 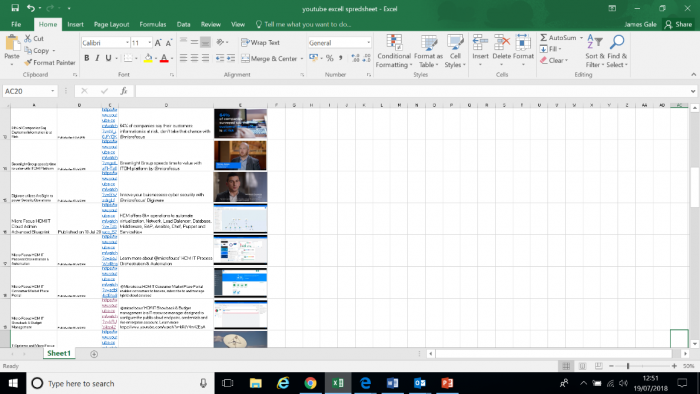 Halfway through the morning we had a meeting with Alison Baker, a member of the Sales Enablement team, who wants to create a Social Selling course for new Sales people joining the company. It sounds like the Sales people already here need help too! Mark worked out the requirements and said that he’d feedback to Alison soon following a meeting with Stephanie. I also need to Google ‘Enablement’ now.

Later in the morning everything went crazy, as we had about one hour to finalise a Product Launch.  Enterprise 4.0 was being launched so we had to check a press release had gone live on time (it had!), proof read and publish a blog, and then schedule a heap of Social Media posts to promote it! By the end of the day I was pretty tired because of all the information I was being bombarded with and what we had done, but it was great fun to be involved with it all.

Thankfully, today was a bit calmer. I made a start on this blogpost, and worked hard on getting my YouTube work underway without any distractions. Halfway through the day and again in the evening I checked that everything was going well with Mark. I was happy to have some time to get busy by myself and get my work done. 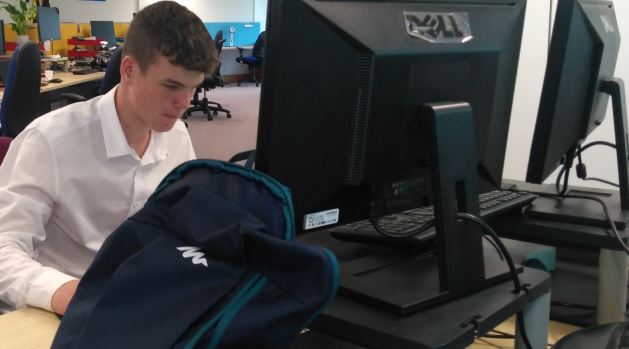 Today we were supposed to be going back to Newbury, but Mark was unable to go as his eldest son had injured his leg the night before at a school leaver BBQ, so we were allowed to work from home!

Wow. This was great.

I made big progress with my blogpost diary and my spreadsheet. I had to meet with Mark twice in the day, once I popped over to his house and another time we just used the phone, he seemed very pleased with what I was doing so I was pretty happy with the week so far. It looks like they will be able to use my spreadsheet and that my diary will be good enough to publish. If you are reading it now online, then it passed the test!

Today was a total surprise. 3 other work experience students joined me and I had to present ‘digital marketing’ to them. I used an office that usually one of the big bosses sits in and talked to the others about what I’d learned so far in the week. I was nervous but I think it went OK. They didn’t ask many questions but Mark said that probably meant that I’d done a good job of explaining.

Then I sent them all a copy of the YouTube spreadsheet and showed them what I had done.  (Actually I couldn’t send it as it was too big for the server or something, so I used a USB stick that we could pass around).

They all helped for the next couple of hours by taking a playlist each and helping me finish my task! This was excellent teamwork and I enjoyed it, despite the others supporting Tottenham and Liverpool.

After lunch we are going to hopefully get my blogpost published and then it’s time to hand my badge and laptop back in (I really wish I didn’t have to give the computer back, it’s awesome and costs a lot of money to buy! About 104 weeks of paper round to be precise AND I have so far honestly resisted the urge to play Fortnite on it during the evenings).

I was really dreading being in an office and talking about computers all week, but it’s been great fun and I have learnt a lot about business too. Thanks to everyone who spent time with me and helped, including the team who helped me perfect this blogpost.

I also now have my own Gravatar, LinkedIN, Twitter and Facebook account which I can use for School and starting my own network. If I met you this week please look for my invitation to connect if I manage to find you once I get my accounts up and running properly, I didn’t really have enough time during the week……..

I hope you’ve enjoyed reading my first ever blogpost as much as I enjoyed my first week in an office – it really has been an experience that’s worked out well….