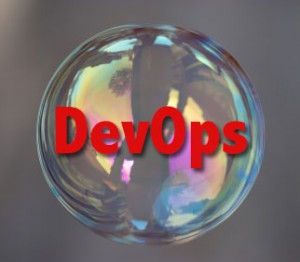 Last week I presented a session at the Agile Development Conference West.  A quick poll of the audience indicated that not one person in the room had heard of DevOps.  This wasn’t the case of people not putting up their hands. We engaged in some good discussions throughout the session and the lack of DevOps knowledge was apparent.

There was one person in the room who works for a company that seems to be quite advanced in agile practices and supportive of automation.  Feedback loops were tight. Communication between Dev and QA was adding value. But, there were still problems once software was to be deployed from QA to production.  The usual challenges were to blame: different deployment methods, environmental differences, incorrect assumptions and so on –  pretty much the norm for many organizations.

I explained a bit about DevOps, breaking down silos and some of the supporting tools available that could solve some of his immediate problems (for example Puppet or Chef).  He really got the value of how engaging Ops earlier in the process and embedding Ops into the cross-functional agile teams would go a long way towards tackling a major area of pain.

My lesson from this is that I made an incorrect assumption.  I assumed that those in development organizations doing agile successfully had likely heard about DevOps.  To encounter people working in an agile silo was a real surprise to me.  I usually keep in mind that many organizations working in DevOps don’t realize that what they are doing is even called “DevOps.” So, I am used to that conversation, but this was a good reminder that there is still a long way to go with DevOps awareness.

A great place to start learning about DevOps is at the Serena DevOps Drive-In webcast series.  Register to attend and get a free bag of popcorn!