My week at Micro Focus started off with me looking upon a smallish office from the visitor’s carpark.

“Well there’s only a few parking spaces, there can’t be too many people working here…” I said to myself. Turns out I was wrong.

Upon entering the building I soon found out that looks can be deceiving; the Micro Focus HQ is quite like a TARDIS. Bigger on the inside and shaped like one too. The atrium is a sight to behold, 3 floors of office space, kitchens and meeting rooms. The centre of the building is large enough to hold several sofas, chairs, tables and a large, upside down elephant (of course). 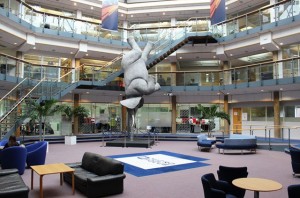 I spent the morning with Customer Care, looking at the ins, outs and joys of customer service. This was followed by an afternoon with Tim overviewing the International Go-To-Market Strategy Organisation (as easy to get my head around as it is to say this department name with a mouthful of crisps).

Despite the size of the main site, it’s overflowing with busy people and space is at a premium, meaning the Recruitment team for Micro Focus are based in a small office in an industrial unit at River Park, which is where I spent my second day. Here I joined in the task of recruiting new employees to Micro Focus via the use of countless emails and interviews.

I also attempted a personality assessment given to these new employees in which I found out I was quite unstable, contrary to what I’d thought of myself beforehand. I won’t take the results to heart.

On my third day here, I was introduced to the concept of Virtual Machines over at Development. It sounds crazy but in short, it turns out we can split up computers into lots of smaller computers. I was given a tour of the large and super-powerful computer behind Development’s virtual machines which allows them to run any version of an Operating System on their computers to allow them to test different versions of software.

In the afternoon, I took a look at Pivot tables which are a neat little thing on Excel, they give the people in Sales a nice visualisation of data. One interesting thing I thing I found out was how easily data can be manipulated by graphs and charts; a bump on a line graph can become a mountain just by changing the scale of the axis!

Hard drives are not an easy business

Day four at Micro Focus gave me a useful insight into the world of IT support. Much of my time there was spent pondering over a laptop whose hard drive had corrupted. After hours of work the IT team managed to revive the machine (although little of the original laptop was left).

My last day here was spent with Mark in Social Media Marketing. I’ve been able to write this blog about my time here, while also putting my #skills to the #test by churning out Micro Focus related tweets (the record for a work experience student is 87 apparently, I’ve got a snowball’s chance in hell of beating it).

So after going round most of the departments here I’ve gained a good insight into the world of office jobs. It’s been exhausting due to the amount of information I’ve had to take in but very enjoyable nonetheless! Thanks to everyone who tolerated me being around, now time to get back to Twitter. #getonwithit…

(This is me at an Airshow – not at Micro Focus!) 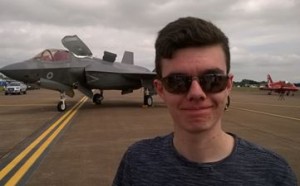