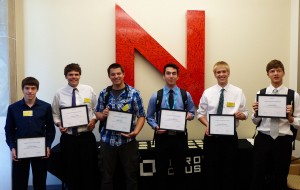 Micro Focus and the Utah State Board of Education are pleased to announce the 2016 winners of the Young Technology Scholar award. The award recognizes talented high school students who demonstrate impressive technological skill and well-rounded character. For almost 20 years, the Young Technology Scholar award has been granted to 121 students from 33 schools around Utah and helped fund scholarships to further their education in pursuing a technology related degree.

Technology is a big part of our world—and the youth of Utah have noticed. In the last sixteen years, the number of engineering degrees in Utah has increased by 130%. It’s a positive trend, so to encourage local tech-savvy high school students, Micro Focus and the State Board of Education created a scholarship program called Young Technology Scholars. The program awards talented, self-motivated high school students scholarship money that they can put towards the degree of their choice.

The founding of Young Technology Scholars

The Young Technology Scholar program was started in 1997 by the Utah State Board of Education and by Novell (now a part of Micro Focus). Together, each contributed $250,000 to create a scholarship fund as a way of rewarding talented high school students for their high achievements in both technology and personal pursuits.

To be considered for the Young Technology Scholars award, recipients had to be highly involved in technology related courses at their high school or applied technology college. Additionally, each participant had to obtain a Micro Focus or SUSE Linux certification before receiving the scholarship award. The application process required students to submit an application, a résumé, two letters of recommendation, a transcript, and a description of their community service. The program wanted to ensure the scholarship money was put to good use, so students were asked to describe their future goals and how they planned to use the money.

Shirley Reynolds, Training Coordinator for Micro Focus and a member of the Young Technology Scholars board, has been involved with the program for several years and enjoys the excitement and energy the recipients bring each year. Reynolds says that the selected students are highly involved and dedicated to both their schools and their communities. “When you’re involved with something outside of school, it tells what kind of person you are,” Reynolds said. “It shows how motivated you are to get everything out of life that you possibly can.” The Young Technology Scholar program furthers students’ motivation to be involved by giving them a goal to work towards and rewarding them for their efforts.

Focus on education and opportunity

The biggest goal of the program is to help high school students realize the importance of a college education. “We want to help students focus on getting a degree they are really interested in while relieving some of the financial burden,” said Reynolds. The program encourages students to pursue their true interests, including computer science and technology. One 2016 winner, Corbin Hinton, plans to put his scholarship money towards pursuing a degree in technology while also studying music.

A major part of the program is increasing students’ technological skills in order to strengthen their résumés. According to Reynolds, the skills recipients learn while applying for the scholarship benefit their future careers. Many past winners were able to create their own small IT businesses in high school using the skills they learned in their technology classes. Other past recipients have gone on to work for large computer software companies throughout Utah. “It’s really cool to see where the winners go throughout their lives,” Reynolds said. “It’s incredible to see the energy and the excitement these students have.”

Involved students also have the chance to develop and act on new ideas. “They’re so creative,” said Reynolds. “They’re creating new apps and tearing down and rebuilding computers from a really young age.” One 2016 winner, Anthony Bible, experimented with a Raspberry Pi device to program a robot with sonar detection. He enabled the head of the robot to move up and down to change camera views. Another 2016 winner, Tim Allison, installed a wireless hotspot that could turn pictures upside down.

Many recipients hope to work in an IT environment once they finish school. Andrew Roberts, a 2016 winner, wants to work for Micro Focus after graduating to further improve his technical skills while benefitting the company. Other students wish to use their technology skills in less conventional ways. 2016 winner Joshua Dickison wishes to study aerospace engineering and design his own aircraft. Click here for more information about the 2016 winners.

For almost 20 years, Young Technology Scholars has awarded 121 scholarships to students from 33 high schools around Utah, donating over $170,000. Talented, creative winners have obtained or are working to obtain various college degrees. Micro Focus and the State Board of Education plan to continue aiding local high school students in pursuing their passions during their college career.